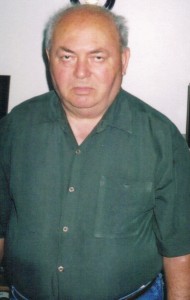 My name is Alexander Kuperberg.  I was born on September 12, 19.4 in Golovanevsk Shtetel of Odessa County.  Before World War II we lived in the village of Ternovka in the Julinsk District, Vinitsa County.

When the war started my father was drafted into the army and my mother, grandmother, my younger brother and I stayed in Ternovka.  There also lived relatives from my father’s side – his grandfather and an aunt with three children.

As soon as German’s arrived, a pogrom against Jews started on May 28.1942.  We were hidden in a basement and at night ran away to the woods.  Grandfather decided that we would go to the village of Rijovka in the Uman district, Kiev County.  He had friends there and thought that they could hide us from the Nazis.  We started to walk there and at the entrance to the village we were arrested.  We were put in jail in the police building.

Ten days later, early in the morning, police ordered us to leave our cell and they put us on a horse cart.  They took us to the outside village and ordered us to lie down.  Then they started to shoot at us.  I felt hit in my head and became unconscious.  When I woke up I realized that I was in a ditch between murdered people.  Policemen were walking around; they saw that I was still alive and one of them shot at me but he was drunk and he missed.

When they left I heard my grandfather screaming.  I crawled to him and he asked me to tie his wound.  I took a kerchief from my dead mother and tied the wound on his belly.  At that time two young people walked by, Grandfather asked them to pull me out of the ditch but they refused and said that they came to cover the ditch with soil.

I was very afraid and pretended to be dead and fell asleep.  When I woke up I crawled to my grandfather, but he was dead.

A few hours later two peasants stopped and looked down at the ditch, I begged them to pull me out.  Finally, one of them lowered a whip to me.  I held it with two hands, they pulled me up and then ran away.

I went to the field and found peasants working there.  Some of them recognized me (they knew my grandfather).  One woman cleaned the wound on my head and brought me back to the village.  She wanted to leave me in her house but her neighbor came and said that policeman were looking for me.  I put my clothing on and quickly ran into the woods.

I decided to go back to my village of Ternovka.  While walking along the road I was German military trucks and decided to hide from them.  I walked into somebody’s garden.  At that time a peasant woman was walking to her well for water.  She saw me and began to ask what I was doing there.  I told her my story and she took me to the swamps and hid me there.  Later she brought me milk and bread.  In the evening she brought me to her home and I stayed with her for eight days.  She told me that following the pogrom in Ternovka only a few Jews were left and I headed there.

My aunt, who lived in Bershad, Romania, found out that I was alive.  She hired someone to bring me to her and I lived with her for some time, but it was hunger everywhere and she sent me to an orphanage where I lived until 1944 when the Soviet Army came.  Later my other aunt came back to Golovanevsk and I stayed with her family until 1953 when I was drafted into the Soviet Army.  After I was discharged I moved to Tashkent, Uzbekistan.  In 1963 I graduated from night high school and entered Tashkent Textile Institute and graduated in 1969.