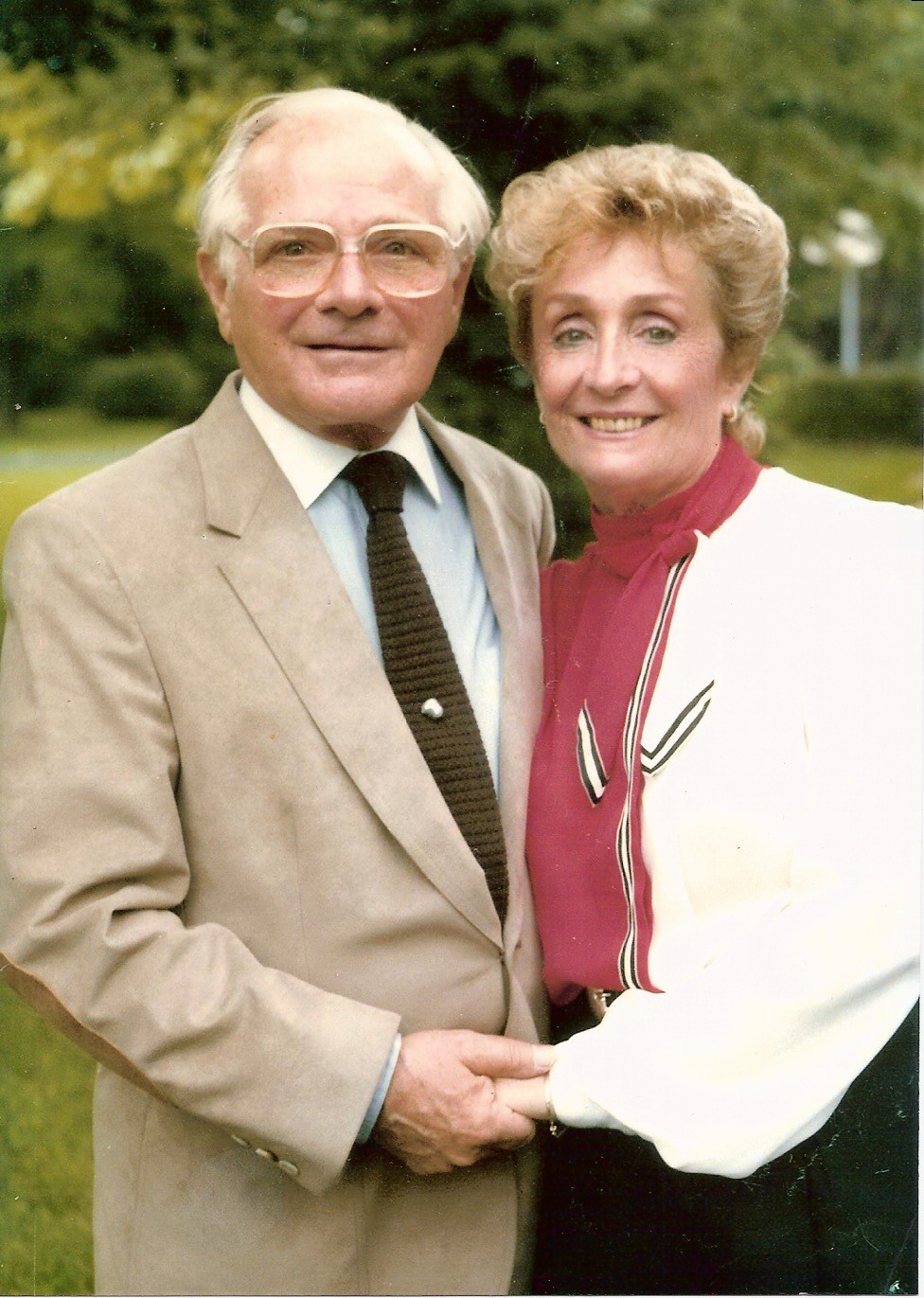 FATHER’S BACKGROUND: Father, Jacob Schottenstein, was one of several brothers and
sisters born in Kurland, Latvia, near seaport Rega. Jacob was a farmer and butcher. The
original family name was Jagetsky. Had the name changed to Schottenstein in Europe. Jacob
left Russia at age 19 to avoid going into the Russian Army, in approximately 1901. Jacob came
to the United States with Walter Katz. One brother, Ben Schottenstein, was later brought
to the United States. One sister went to Buenos Aires, South America and married a Kans.
One son of this marriage, Isaac Kans, is now in Columbus and working at the Schottenstein
Department Store. Another sister is now living in Israel. The sisters that remained in Europe
were lost in Hitler’s holocaust. Also, a cousin, Ben Schottenstein, is now living in
Israel.

The family lived in a large Jewish community in Kurland. There was much interest in
literature and music and they all had a good religious background. One of Jacob’s sisters
was married to Allen Michaelson a Hebrew school teacher, who also sang in the synagogue in
Europe.

Jacob Schottenstein came to Columbus because an uncle, also named Jacob, was here.

Uncle Jacob came to Columbus because of advertising in Jewish newspapers soliciting
help for the Columbus Jewish community. He operated a pawn shop on Long Street, later went
into the bicycle business; was married to Sara; was President of the Agudas Achim
Synagogue and active in total community work all his life; he was instrumental in forming
the original synagogue on 5th Street.

MOTHER’S BACKGROUND: Mother, Augusta (Gussie) Goldberg. Her father was Joseph. Had 8
or 9 brothers and sisters. The original name was Goldberg but through the spelling or
pronunciation at Ellis Island it changed to Gilberg Gussie was born in New York.

GUSSIE AND JACOB: Married in 1906 or 7. Settled in Columbus at 448 East Livingston
Avenue . Jacob went to work as a butcher for Sol Katz. He then bought out the shares of a
Mr. Mellman, who was in the soft drink business, which was to become the Ohio Soda Water
Co. He later became sole owner and when his brother, Ben, came over from Europe they worked
together in the company. Ben later operated his own company under the name Standard Soda
Water Co. Jacob was an active Zionist. He worked with the Hertzel movement along with the
Seff family, who were cousins. Jacob died in 1934.

EDUCATION: Attended Beck Street Elementary School, Mound Street School, Barrett Jr.
High School, South High School. By attending summer school was able to graduate from high
school at age 16. Entered the College of Pharmacy at Ohio State University and graduated
in 1931. Goal was to enter medical school but was refused entrance because of graduating
College of Pharmacy. Registrar considered this enough of a profession and would not accept
application for medical school. Alvin went to East High School. Other brothers went to
Roosevelt Jr. High School and South High School. Sister went to South High School and Ohio
State University; graduated in education and taught for a while but later became a
secretary for a government agency; married Irving Hemm went to Ohio State University for 2
years and then entered into business with father. Irving grew up in business and stayed.
Alvin was involved in family business but later sold his interest to brothers. Irving
passed away in 1951 and Herman in 1959. Efraim and son founded the Schottenstein
Department Store.

BUSINESS OPERATION: Jacob Schottenstein employed between 8 and 10 people at the
Ohio Soda Water Co. The business involved bottling and distributing the bottles to various
places in the city. The bottles were cleaned by putting metal pellets inside the bottle
and then soaking the bottle in a tub of soapy water, shaking and finally rinsing in clear
water. The bottles were filled and then capped with a porcelain top with a rubber washer
and a clip spring. The word “pop” originated from this cap. When the bottle was
opened the gas in the bottle would make it pop. Business was open on Shabbes but closed on
Yom Kippur.

DISCRIMINATION: In the early days of Winding Hollow there was that feeling of
discrimination but in the 1930’s and ’40’s they started taking members who were in the
Excelsior Club.

REMEMBRANCES: Rabbi Levinger: A dynamic intellectual; he and wife were fine people;
instrumental. in setting the tone of the present Hillel Foundation. Cantor and
Shochet Silverman: Neighbors on 18th St. Rabbi Warne: Neighbors on 18th St.; held classes
in his home on higher Hebrew education; way ahead of his time, held classes in English;
was very athletic, went to YMCA to swim. Rabbi Neccah was at the Agudas Achim for a short
time. Also remembers Rabbi Taxon and his mother. Rabbi Hirschbaum was a neighbor; moved
into Rabbi Werne’s home on 18th St.; a studious quiet man; spoke in Yiddish but had a good
English vocabulary and was a good speaker. Leaders in the Jewish community at this time
were: The Schottenstein family, mother and father, Jamb and Sets and
Max. The Wolman family, Bert, Sam and their father. The Goldbergs and Jacob Yenkin. Leaders
in the general community: Water Katz, Big Dave Levinson and got involved, Schanfarber, an
attorney.