Short stories about the old Jewish neighborhoods written by community members. To submit a story of your own please contact us here.

When I was growing up in the 1930’s and 1940’s before the new synagogue was built at Broad and Roosevelt in Bexley, the Agudas Achim congregation where most all our family were members was located in a declining residential neighborhood just southeast of downtown Columbus at the corner of Washington Avenue and Donaldson Street.  The building that housed what was known as the “big shul” no longer exists, and the area is now a combination of freeways and redevelopment projects.

Agudas Achim Synagogue located near the corner of Washington and Donaldson

Our family went to shul most Shabbat (Saturday) mornings.  It was too far to walk from Bexley but, showing respect for the concept of not driving on the Sabbath, my father would park our car one or two blocks away and around a corner.  Then we would walk from there.  I don’t recall what my grandparents Jacob and Musa Yenkin did, since in their entire life they never would get in a car on Shabbos.   Grandpa may have said the prayers at home, while Grandma was busy preparing lunch.  Each Saturday (as well as having come for Friday night dinner) the Yenkins, all of us, my aunts, uncles, and cousins gathered at 381 South Drexel for Shabbat lunch.

Getting to shul during the High Holidays each fall, when none of our family would ride in a car, required different logistics.   My mother, father, sisters and I would move in with my Grandma Weiner at 599 Wilson Avenue, which was about a 25 minute walk from the shul.  I remember those walks, and the annual dread of a large orange colored Chow dog whose menacing growl manifested his displeasure at our walking down his street.  Apparently leashes were not a requirement in those days, because he was  certainly free to harass us, although he never went so far as to bite.  My Yenkin grandparents would move in with the Simon Handler family, who lived nearer the shul, and who were “landesmen” from Usvyaty (near Vitebsk) in Byelorussia. 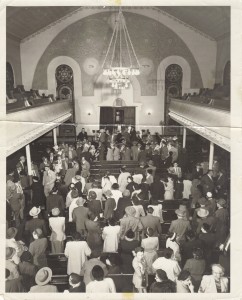 As was the custom, women sat separately in an elongated U-shaped 2nd floor balcony 4 or 5 rows deep.  I would often come up and sit for a while with my mother and aunts to ease my kid’s impatience with the long service which in those years was conducted completely in Hebrew, except for announcements, and except for Rabbi Hirschsprung’s sermon which he gave on alternate weeks in either English or Yiddish.   Daughters sat with their mothers.   My mother generally sat in the first or second row, so she had a good view of what was happening downstairs.

On the main floor of the sanctuary, looking toward the Torah Ark, the Yenkin men sat in front on the right side of the Bimah, and if I was not downstairs in junior congregation, or visiting my mother, I usually sat there, on the oak pew benches, with my father, grandfather, and uncles.  Before he died in 1934, my mother’s father, Grandpa Sam Weiner, sat on the left side of the Bimah.  Often I would walk over to the very front of the bimah where the bench faced out to the congregants, and sit with Jacob Schottenstein who was married to my mother’s great-aunt.  Uncle Jake, outgoing and gregarious, was a pillar of the congregation.  He and I were pals (my mother also bought our Schwinn bikes from his store on Long Street.)  Tall, with a white goatee, and formally dressed in a vested morning suit, he called me “honey boy” and gave me snuff to make me sneeze.   He would have smiled to know that some decades later “honey boy” would marry his brother’s lovely granddaughter.

Our family came to Columbus about 1904 or 1905. My father was an ordained Rabbi and Cantor, coming to an Orthodox congregation whose name I do not remember (Ed. note: Agudas Achim). It was an old, frame building with an impressive flight of wooden steps leading to the front doors. A year or two later it was replaced by a brick building on a corner lot on Washington Street.

I played around the foundation, and was in it almost daily while it was being built. We thought it to be a magnificent edifice. Electric lights were there in abundance—sufficient to make the synagogue uncomfortably warm, if not hot. Most homes had just moved from kerosene lamps to gas. Electricity was still a novelty. So new buildings had a profusion of electric lights—beyond the need of illumination. Downtown Columbus had erected a cross-arch of electric lights at its main downtown center.

The dedication of that synagogue was an impressive event, with the leading, distinguished men in a parade from the old one to the new. The Torahs were carried by men dressed in Prince Albert outfits with tall, shiny opera hats (called stovepipes). At the new synagogue they were greeted by the choir singing “S’u shearim” (Open ye gates) and the doors opened. We have a picture of that choir. Some of the youngest may yet be alive at this writing. Soprano and alto voices were supplied by boys before their voices changed.

My father introduced a “Sunday School” which was radical for those days. A Hebrew teacher was secured, named Silber – who was a splendid Yiddish speaker described as with “a silvert (Silber) tongue.” When he had occasion to write a Hebrew letter, my father would compose it for him to be copied. Other than my father he was my first Hebrew teacher (Which he recalled on our several meetings many years later). Ultimately Silber became a Rabbi in Chicago where he founded the Hebrew Theological Seminary.

We lived on Washington Street, about a block away from the synagogue, and near High Street. There were many large open spaces, many barns. Outdoor water pumps were in use. Grape-arbors were many. Next door was an open field which was ploughed each year with a horse (stabled in the back of the house) and sown for corn. Balloon ascensions were frequent from a field only a block away.

More affluent homes had an attractive harp in the front room. The harp would be played. The front room was opened only for visitors. Dogs were many. The two favorite were British Bull and large mastiff—the latter used to draw home-made wagons. There were street-cars but most traffic was horse-drawn. Horses used on a regular route would automatically stop at their regular stops. Street lamps were gas lighted—each evening a man turned-on the light, and each morning turned-off the light. Fire-engines were horse-drawn. The horses were so well-trained that when the alarm sounded they would automatically take their positions ready for harnessing and taking-off at a fast pace.

Those who wanted the latest news, and not wanting to wait for an “Extra”, would gather at the newspaper office which posted written news items. At national elections crowds gathered during the night. The paper let down a white cloth sheet, and from across the street with a “magic lantern” projected the returns as received over the telegraph wire. Whichever side was pleased cheered each announcement.